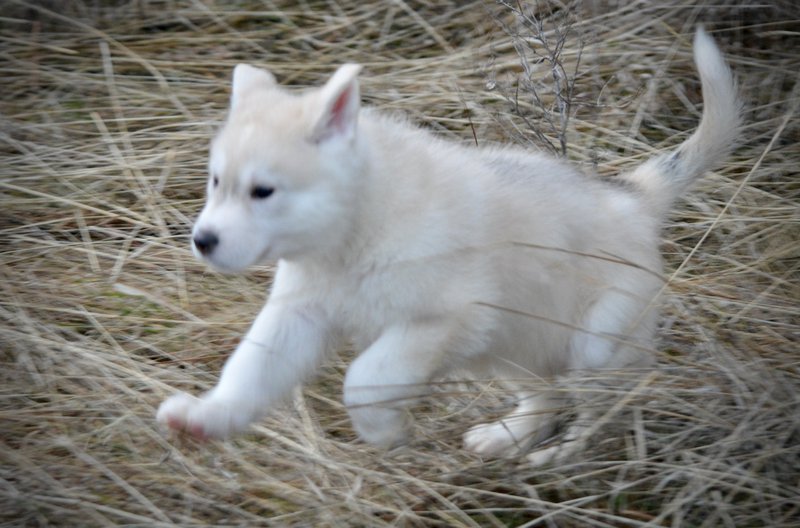 Some families tell us they have chickens and ducks on their small acreage. They come to the Dire Wolf Project looking for a companion dog that won't bother their small feathered friends. DireWolf Dogs are bred to have a low prey drive, so this desire makes sense. However, there is a difference between low prey drive and no prey drive. In this article, we will clearly explain what prey drive means and the amount of prey drive you can expect when you receive your new large breed companion puppy.

Many dogs love to chase rabbits or fetch balls and sticks. Their instincts dictate that if a small object moves away from them, they better follow. This tendency is referred to as prey drive. Essentially, it’s a dog’s impulse to stalk, hunt and, eventually stop a moving target. The degree of excitement and willingness to chase something moving away from it can be measured. The quicker and more enthusiastically a puppy or dog bounds after a retreating object, the stronger or higher the prey drive. The slower and less energetically a puppy or dog moves in the direction of a retreating object, the weaker or lower the prey drive.

First of all, it is important to understand that ALL canines are hard-wired to hunt. Coming from their wild wolf cousins many years prior, dogs have not lost their fundamental hunting instinct, no matter how easy-going or mellow they happen to be. While the Dire Wolf Project breeds beautiful, mellow dogs with low prey drives, that does not mean we have somehow altered the fundamental internal structure of what a canine is. DireWolf Dogs are still dogs, no matter how mellow. Our breeders have lowered the impulse in our dogs to chase and hunt, but, decreasing the desire to chase doesn't mean our large breed family companion dogs will never chase a creature moving away from them. 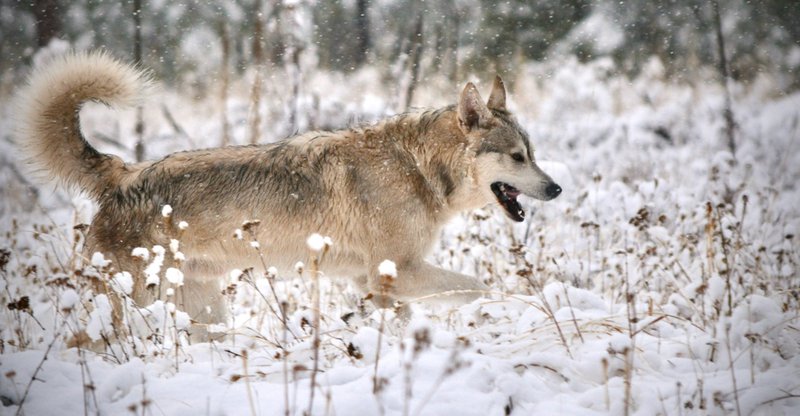 Florin (Triton/Darla) running through the snow.

The Dire Wolf Project measures prey drive in a measure of degree. In fact, our two founding breeders, Schwarz Dogs and DireWolf Dogs of Vallecito, created a ten-point scale to illustrate the complex polygenic inherited temperament of this particular aspect of the canine family. Temperament traits are experienced as highly involved genetic inheritance, shown on multiple alleles within the canine genome. Geneticists have yet to identify exactly where these are found on the dog's DNA, but they know that many alleles are involved because of the vast array of temperament difference between the various purebred dog breeds all around the planet.

According to the American Kennel Club, The following dog breed groups possess the strongest prey drive: hounds, terriers, sporting, and herding dog breeds. This makes sense considering all of the breeds within these categories were bred for hundreds or even thousands of years to hunt, chase, and retrieve prey. The Coonhound developed a keen hunting ability, baying loudly as it endlessly pursues its black-masked prey. The long-bodied Dachshund darts into a narrow weasel's den thrashing about violently in order to steer clear of the sharp claws and fierce bite from its foe. A healthy dose of prey drive has allowed working dogs to coexist well with humans as man's best friend for centuries.

This symbiotic relationship between man and canine began to shift as the Industrial Revolution moved the majority of humans into cities and suburbs where working dogs no longer fit within the smaller confines of high rise apartments and tight-fitting rows of houses. Since that time, smaller dog breeds developed into mellow companion dogs with lower prey drive. Most notably, the Cavalier King Charles Spaniel became well known as a mellow lap dog whose only goal was to be near its master. Similarly, other small dog breeds with low prey drive include: Pug, Havanese, Maltese, Papillon, Pomeranian, and others. According to the AKC, these types of small dogs bred with lower prey drive are placed into the toy dog group. AKC also acknowledges dogs of varying size and personality that do not fit within the working dog groups above, but are slightly larger than their smaller toy cousins. These dogs have been placed in the non-sporting dog group and include does like: Dalmatian, Keeshond, Poodle, Schipperke, Chow Chow, French Bulldog, etc.

Until Lois Schwarz began her work of systematically choosing large to extra large puppies with low drive and mellow, easy-going temperaments, no large to extra large dog breed in the world could claim to have been bred specifically as a companion dog breed. Today, the Dire Wolf Project regularly breeds dogs with low prey drives that do not have a strong tendency to chase objects moving away from them. Our dogs would fit squarely within the non-sporting dog category, if we subscribed to AKC's dog breed delineation, which we do not. If there was a snuggling love bug category, that would fit us even better.

With all of that being said, sometimes an attractive fantasy of the perfect dog can take over our imagination. This super dog doesn't do anything wrong at any time and always fits perfectly within any situation. Unfortunately, this rosy dreamworld simply doesn't exist. Dogs are living beings with different personalities that mold themselves to the environment in which they live. Dire Wolf Project breeders can help you find the most mellow puppy on the planet that saunters from room to room following you like a shadow, never going more than a soft trot, but still, without boundaries and proper training, your puppy may not turn out the way you envisioned.

If you leave your puppy out with the chickens in a yard when you have not set boundaries or taught your puppy how to interact with these suspiciously flighty fowl, then you may notice that your once mellow companion has chosen to stretch the boundaries of its breed and begins to chase your prized birds. Let's look at a possible scenario to emphasize the very real life situations that could alter a mellow DireWolf Dog puppy's understanding of the world living with its fine feathered friends. 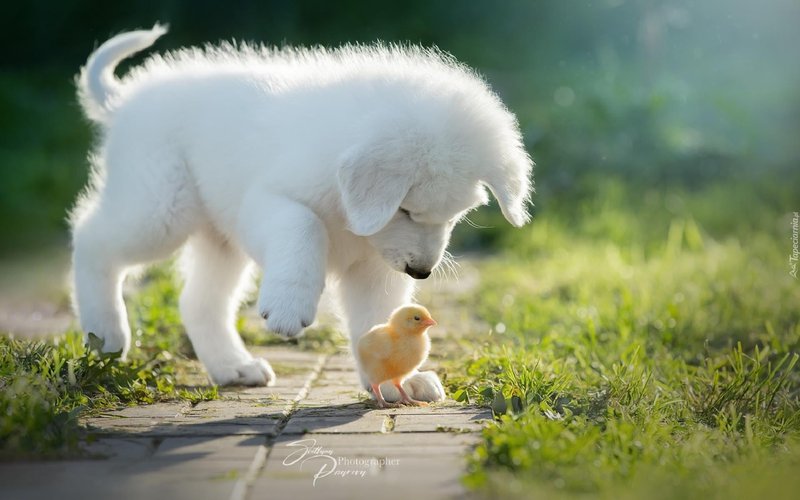 It starts with a stare. The puppy only wants to understand all about this interesting animal, but the unsuspecting chicken doesn't see the dog's body tense. However, it does notice a particular tasty bug two flowers over. At that moment, the chicken runs over to catch the little insect. The puppy thinks staring made the birdie run and perks its ears up at this fun new game. The bird doesn't move, continuing to peck at the ground. Your puppy wants to make the birdie move again and tries to figure out how to do it. Pouncing just a bit too roughly for its bulk, your DireWolf Dog knocks the chicken off balance and a blur of feathers and rush of cackling ensue. The innocent puppy's eyes widen at the chicken's reaction. What a fun game. The puppy tries it a second time. Again, the chicken cackles and flutters away. The puppy's mouth opens and its tongue hangs down as it smiles a big grimace of joy. It has just learned how to get the chicken to move. Now, the person behind the grill turning the corn on the cob notices the bird's distress calls and rushes over to pick up the puppy, scolding it for bothering the chicken, but it's too late. The puppy now knows that chickens can be fun. The person sets puppy down farther away from the chicken. Puppy looks up at the human and waits for him/her to be distracted before pouncing at the chicken once again.

Dire Wolf Project breeders cannot be responsible for the environment in which an owner places their puppy. Instead of confining the puppy away from the chicken in a place where puppy can learn the secrets of chicken behavior, this fictional person allowed chicken and puppy to be free in the same environment without boundaries or directions. Instead of teaching puppy that looking at the chicken with excited eyes was unacceptable, this person did not even notice the first chicken encounter. Instead of noticing the puppy's first pounce, scolding puppy, and placing the puppy behind a safe boundary where it can watch and not interact, this person did not intervene and the interaction increased in excitement. This person did not respond to the initial encounters and continued to allow puppy and chicken in the same environment so that he/she could catch puppy in the act and finally scold puppy for enjoying the chicken chase game. 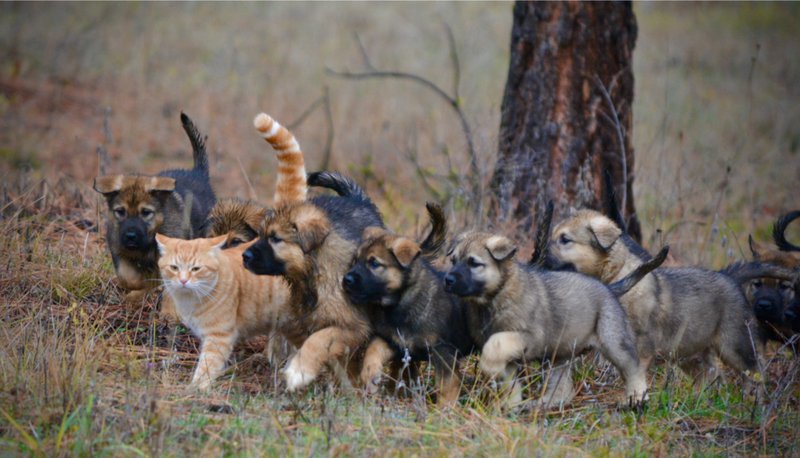 The same goes for cats. Some cats are very docile and will submit to any perceived threat. Baby DireWolf Dog puppies are rightly curious about these strange furry creatures with secret claws and unfamiliar sounds. Without giving your puppy a chance behind the safety of a barrier to get to know a cat and its ways, a new owner may find that their puppy enthusiastically smothers a submissive, unsuspecting cat as its tongue and mouth explore the interesting breathing toy. It isn't that the prey drive is high. It is the case that their curiosity for the new creature is high. If the cat darts off away a few feet from the puppy and then sits to lick its fur, puppy might misinterpret that action as an invitation to play. After all, canines pounce and dart during play all of the time, even mellow ones. It is the new owner's responsibility to teach their puppy boundaries around the animals it lives among. Allowing nature to take its course or the old "they will figure it out" mentality is not going to work. Structure your puppy's life. Give it the gift of understanding what is right and what is wrong when interacting with unfamiliar animals.

Low prey drive doesn't mean NO prey drive. DireWolf Dogs are canine carnivores with big paws, large bulky size, and sharp teeth. A young, impressionable DireWolf Dog puppy can still develop a desire to chase if circumstances are right in the environment. It is up to you to mold your puppy and teach it how to safely interact with the animals in your life.