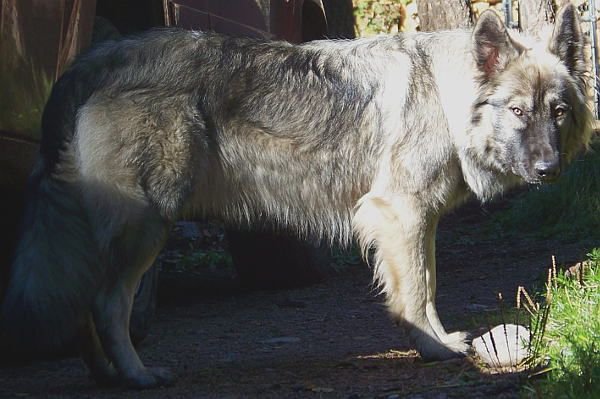 The Dire Wolf Project was first developed by Lois Schwarz in 1987. The first litter between a purebred Alaskan Malamute (Buddy) and a purebred German Shepherd Dog (Swanny) was whelped on February 4, 1988 in Oxnard, California. 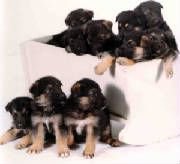 The idea for this new breed of dog entered the mind of a child around the year 1969 when a mixed German Shepherd Dog followed her home. At the age of 9 years old, Lois started breeding animals. (Guinea pigs, pigeons, mice and rats.) Genetics had a hold on her and she spent her days in local libraries researching her passion. She kept records of the coat colors, density, eye shapes, mutation, and albinism that occurred.

By the time Lois was 30, she had the experience behind her of hundreds of breeds as she trained, groomed, handled and bred animals for others. In her mind she was constantly evaluating and gathering information as an image of a new breed of dog formed deep within her. She prepared a standard of what this new breed would look like and how it should behave. She knew the character it needed to have to become the best breed she had ever known. The brains and heart of the dog had to come first. She was concerned about the looks just yet. She imagined that could be done in a couple of generations, but the heart and intelligence would take some time. She had figured at least 6 years. This would be an expensive undertaking and would take a lot longer than she had imagined.

CH. You Can Call Me Al

Several AKC American Show Shepherds, other working German Shepherd Dogs coming directly from Germany, Holland, and Canada, as well as two purebred Alaskan Malamutes formed the basis of the foundation stock used to start shaping the temperament and character so prized in this relatively new large breed of dog, the North American Shepalute. After ten years of breeding within these mixed lines, a new and consistent temperament was formed, although the look was still too similar to the German Shepherd Dog. It was at this time that a few hand selected North American Shepalute dogs with mellow, even temperaments were then crossbred with a fawn colored English Mastiff, Brite Stars Willow of Cold Springs, who was out of Ch. Brite Starts Sir Winston Churchill who gained his championship at the young age of 18 months. The English Mastiff breed was chosen to add the full round bone and large head of Lois's ideal large breed companion dog.

After several years of breeding these shepalute/mastiff mixed dogs and choosing only the quietest, boldest dogs in the litter (and disregarding the look in order to concentrate on the most important feature of this new breed, its companion dog personality), each litter began to reproduce themselves consistently, thus continuing the formation of a new rare breed of dog. In 2002, all the lines were set and each litter produced a similar personality and look. These purebred dogs were bred unto themselves to beget 18th and 20th generations. Two years later, her daughter, Jennifer Stoeckl joined Lois in her pursuit to solidify the world's first large breed companion dog. Together, they chose to change the name of the dogs to American Alsatian™. These dogs were again crossed with unrelated dogs in 2006. This time the crossbred dogs were an Anatolian/Great Pyrenees mix out of purebred lines and a shepherd/malamute mix. She chose these two dogs in order to keep the largeness and enhance the temperament.

Not satisfied with the coat texture and overall size and shape of the American Alsatian dogs continued development, Lois arranged to add the Irish Wolfhound and other giant Alaskan Malamutes into the lines. She also added the sweet-natured black Labrador Retriever and another Akita. Working closely with her daughter, Jennifer Stoeckl, these American Alsatian mix dogs were bred together, consistently working out any health and temperament issues that crept into the breed from these crosses.

As one can see, the name of the breed has changed several times as the dogs within the breed progressed from a mixed breed of dog to a separate breed conforming to its own unique standards in temperament and looks. In 1988, the name of the breed was the North American Shepalute. Lois Schwarz chose to take the words shepherd and malamute and blend them together to reflect the blending of the two founding breeds.

In 2004, the breed name changed to Alsatian Shepalute in order to start the transition from the portmanteau word, Shepalute, to a name that harkened back to the past when the German Shepherd Dog was called the Alsatian Wolfdog. The term Alsatian came to remind one of a dog that looked, in some general characteristics, similar to a wolf. Since this breed was meant to resemble the Dire Wolf in bone and body structure, this term was adopted.

On February 21, 2010, the name of the breed was again changed to American Alsatian™, dropping Shepalute all together. Lois and Jennifer decided this change in order to completely eliminate the tie this breed once had to the mix breeding of the shepherd and the malamute. The descriptive term American was added in order to reflect this breed’s origins and create a distinctiveness from the colloquial usage of Alsatian in Great Britain, Australia and New Zealand.

Under Lois's tutelage, Lois's younger daughter, Amey Gage, decided to join the breeding family in 2022 under her own kennel name: Kingsley Kennels. Not able to work together with her sister, Jennifer chose to continue Lois's original strongbred ideal without the rivalry that quickly developed. As a result, in July 2022, Jennifer discontinued the use of Lois's trademark, American Alsatian™. Today, the Dire Wolf Project™ continues under the express direction of Jennifer Stoeckl. The American Dirus™ is now the dog breed bred by the Dire Wolf Project. Lois and her daughter Amey continue to breed American Alsatian dogs at Schwarz Dogs.

At present, each American Dirus dog when bred begets itself in health and temperament, but the Dire Wolf look is not yet complete. Because Lois concentrated on the health and the mellow, calm, non-barking temperament before looks, the breed’s conformation is still under development. DireWolf Dogs, Int'l will be working to improve the bred back look of the Dire Wolf, including the two coat colors theories that have emerged. At some point, we will once again crossbreed, this time in order to concentrate on the Dire Wolf look of the breed without compromising the health and temperament that have proved to be the most difficult of the three to achieve.