The initial results of the dire wolf's unique DNA profile point to a likely inability for the dire wolf to interbreed with gray wolves, dogs, or coyotes. Genetic paleontologists working on this prehistoric genome project in 2021 propose a reclassification for this famous massive Ice Age carnivore.

Luckily, in 1918, a paleontologist working at La Brea Tar Pits named John Campbell Merriam proposed a separate genus title (Aenocyon) for this large canine in order to clear up the confusion that had been occurring as separate scientists found dire wolf remains all around the country. However, his science colleagues ultimately could not agree on whether a genus change was appropriate for this creature that looked so morphologically similar to the gray wolf and his genus change suggestion was rejected. 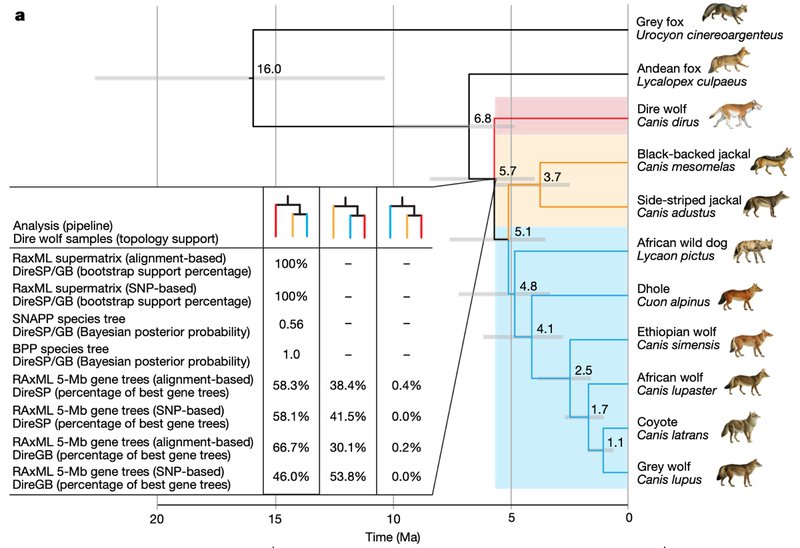 Today, because of the DNA and protein analysis performed by paleontologist, Dr. Angela Perri, the dire wolf no longer recides in the canis genus. Instead, scientists have returned to the older proposed genus delineation from 1918, Aenocyon.

This officially takes the dire wolf out of the canis category prompting many to no longer consider the dire wolf a wolf. This bone crushing beast, while still a canid and morphologically still so similar in structure to the wolf, is now classified as something else entirely.

Continued genetic research on this extinct canid will likely reveal more information about just what a dire wolf was and why it was not able to adapt in order to survive as a species.

The Dire Wolf Project aims to recreate the exact bone and body structure of the extinct, prehistoric dire wolf and uses well-known morphological studies regarding the dire wolf in order to to aid in our progress toward this fascinating outward appearance goal. Our goals do not change based on this new information, since we base our work on observable dire wolf bone and body structure. However, we always promote genetic diversity and will work to include many different coat color types, including the red, jackal-like coloring that has recently been proposed.

Copyright Disclaimer under section 107 of the Copyright Act 1976, allowance is made for “fair use” for purposes such as criticism, comment, news reporting, teaching, scholarship, education, and research. All video/game content is recorded and edited under fair use rights for reasons of commentary and social satire. The Dire Wolf Project does not own or claim to own the images used in this article.