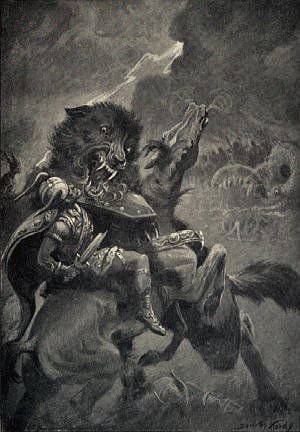 Dire Wolves have always been attributed to fierce, ‘larger than life’ wolf-like creatures. Ever since their discovery in 1854, many have placed the Dire Wolf in a grotesquely over-exaggerated category of gigantic monstrous saber-toothed, green eyed demons. Of course it never really was, but fantasy and reality blur in our minds when we think of this large predatory creature that ruled prehistoric history. Because Aenocyon dirus is now extinct, our minds run wild with illusion as we try to imagine the Dire Wolf in that harsh icy world.

In Norse mythology, Fenrir was a giant wolf bound at the command of the God, Odin. The Aesir (Norse gods) asked the dwarves (svartalfar) to create fetters for the wolf, which was kept in Asgard where the gods lived until there was a prophecy that at Ragnarök, the “Twilight of the Gods,” the wolf Fenrir would devour Odin whole. The dwarves made three fetters for the wolf, the first two failing due to the wolf’s immense strength and size. The third, a simple silken band infused with magic named Gleipnir, was used only after the god Tyr convinced Fenrir to try to escape it to prove his might. Fenrir, not wanting to be fettered but eager to prove his might, said that he would break the fetter, but Tyr must place his hand in the wolf’s mouth while he tried, not wanting to be bound. Gleipnir worked as intended, impossibly binding the wolf. When the gods refused to release Fenrir, he famously bit off the right hand of Tyr. The gods then used great stones to pin Gleipnir into the ground, pinning and trapping Fenrir until Ragnarök. Fenrir was not killed, but the Aesir did “gag” his maw with a great iron sword by stabbing the roof of his mouth and placing the pommel in the wolf’s lower jaw.

Odin’s sons were not responsible for the prophecy involving Ragnarök; it was Odin himself. Odin is the god of wisdom, foresight, knowledge, and prophecy. And Ragnarök was prophesied, but was never detailed in any of the sagas or other sources. Therefore, if you believe the old sagas and stories, Fenrir, son of the Aesir Loki and the jötunn Angrboða, still awaits release at Ragnarök. He will rejoin his brother, the mighty World Serpent Jörmungandr, to fight the Aesir. Thor will face Jörmungandr and slay the wyrm, only to fall dead after nine steps (one for each of the realms on the World Tree) due to the venom of the dragon. Odin will face Fenrir, without the might of his son, only to be swallowed whole by the wolf.

This fierce giant wolf comes to our minds when we think about the dire wolf. Some even say that Fenrir was a dire wolf. However, the poem was written in the 13th century, well before anyone knew of the dire wolf’s existence. But, could this story have been orally handed down through each passing generation only to be written about on some dark and stormy night? More realistically though, this famous poem was not about a wolf at all, but about the internal human suffering in each of us. An interesting article, Dire Wolves Within, on ancient dire wolf mythology coupled with the history of the use of language suggests just that. Nonetheless, this giant evil wolf has come to haunt our fantasies and fairy tales and many myths surrounding the dire wolf remain. 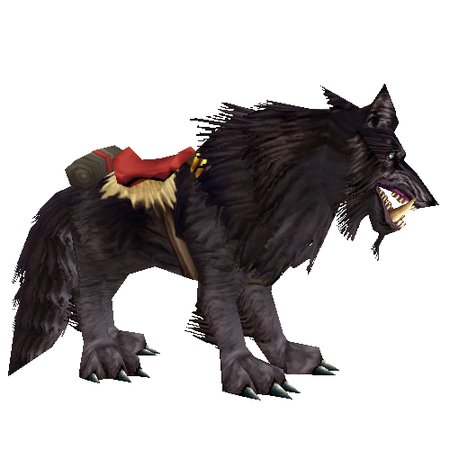 While dire wolves were a bit larger than the Gray Wolf, overall they were much the same size, although heavier and stockier. Their heads were the main difference as they were much more massive, wide, and thicker with muscle than an average Gray Wolf. They were not the size of small horses or bears and certainly not 5 feet tall and 500 – 600 pounds as World of Warcraft suggests.

While dire wolves did have larger teeth than gray wolves, their teeth did NOT protrude out from under their upper lips any differently than a regular wolf’s fangs. The saber-toothed look of the prehistoric cat is NOT an actual fact of dire wolf anatomy.

Fossil evidence clearly shows that dire wolves were real predators roaming throughout North America at one time on Earth. Role playing games have perpetuated this myth, using the name “Dire Wolf” to describe enormous, vicious wolves in several games and novels. Dire wolves were very much real, but after dominating the ice age world for around 100,000 years, they quickly died off and were never seen alive again.

Dire wolves were no more aggressive than modern wolves. It would seem that paleontologists have been able to analyze bones (bone growth analysis) to discover that although dire wolves could be vicious toward one another, they also found that heavily injured dire wolves lived much longer than they would have on their own. This leads many to believe that these wolves took care of their injured when they couldn’t otherwise. This does not lend itself to more ferocious than modern wolves. According to some scientists, dire wolves ran in packs of 30 or more, this alone would be more intimidating, but there is no evidence they were ferocious man-eating beasts.

While dire wolves and gray wolves did evolve from a similar ancestor, Leptocyon, over 5 to 6 million years ago, the dire wolf was the direct descendent of the Armbruster’s wolf (Canis armbrusteri) while the modern gray wolf is descended from the Hare-eating wolf (Canis lepophagus). Thus, the dire wolf is a completely different species from the gray wolf. 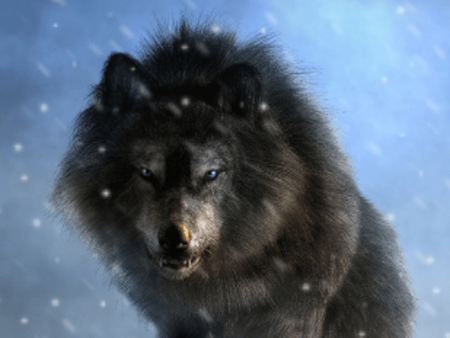