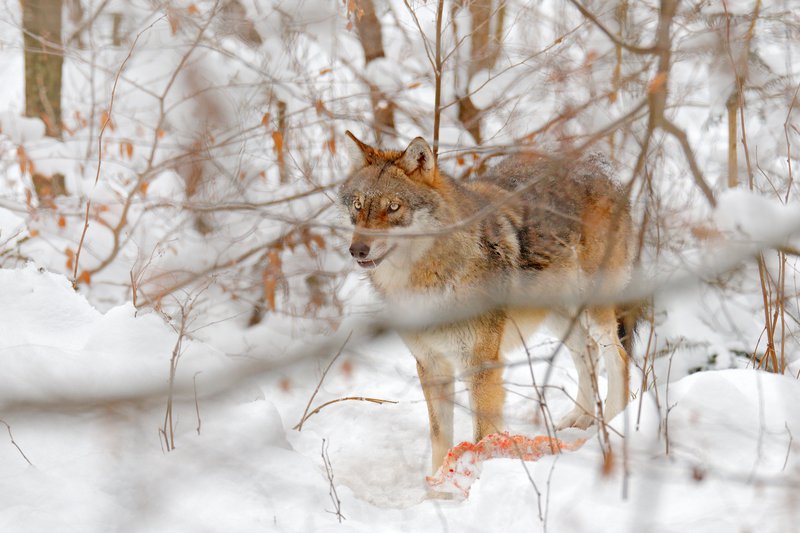 Paleontologists now agree that the Dire Wolf evolved in North America. However, the ancestral lineage that gave rise to it is debated with two competing theories. The first theory is based on fossil morphology, which indicates an expansion of genus Canis from out of Eurasia led to the Dire Wolf. The second theory is based on DNA evidence, which indicates the Dire Wolf arose from an ancestral lineage which originated in the Americas and was separate to genus Canis.

Throughout history, the earth has experienced several periods of warming and cooling. The Ice Age is just one of these periods; a time when sheets of ice covered most of the earth’s surface and only a few plants and animals survived. (3)

Dire Wolves were one of these species that staked their claim on the remaining lush terrain as they roamed throughout the Americas. We know, by looking at the fossil record, that Dire Wolves roamed North and South America between 250,000 and 13,000 years ago during the Late Pleistocene Epoch–also known as the Ice Age (4). While they were one of the most common predators of the Ice Age, they were not the only one; the Gray Wolf lived alongside the Dire Wolf and posed a serious competition for their common prey.

One of these members of the genus Canis is the Gray Wolf. Because of the similarities in anatomical structure and since the two species coexisted, some paleontologists have suggested that not only were Dire Wolves closely related to Gray Wolves, but also that they were direct descendants of them. To emphasize the similarity, for a long time, scientists even listed Dire Wolves and Gray Wolves under the same Genus: Canis Lupus (2).

To further this point, paleontologists have inspected the anatomical structure of the two species to determine their relation. For example, when you look at the Gray Wolves’ mandible centroid and molar size (aka: jaw and teeth size), they, among all other closely related Canid species, are most similar in size to those of the Dire Wolves’ (2).

Given the interestingly similar composition and bone structure between Dire Wolves and Gray Wolves, it would be fair to ask; are Dire Wolves directly related to Gray Wolves or could they have evolved separately, but with such similar morphology?

Analyzing fossil remains is great for learning about ancient animal relationships with other species and their living patterns, but scientists can’t always paint the entire picture using fossil remains alone. Ancient preserved mitochondrial DNA can provide insight and clues into missing information in an animal’s anatomy, and DNA evidence can be especially useful when trying to understand ancestry.

This recent DNA research highlighted the new evolutionary theory that “... dire wolf lineage split off from the one leading to gray wolves around 5.5 million years ago and remained isolated despite later overlapping in territory with other canid species for thousands of years. Such genetic seclusion is unusual between related canid species, which often do interbreed” (1).

This type of early split would mean that Gray and Dire Wolves have a lesser recent common ancestor than that of coyotes, jackals, and African wild dogs, thus making these species more closely related to Gray Wolves than Dire Wolves. One could deduce, therefore, that since these species are not “wolves”, neither should Dire Wolves.

The researchers summarized their findings in this statement, “This suggests that dire wolves evolved in isolation from the Pleistocene ancestors of these species. Our results also support an early New World origin of dire wolves, while the ancestors of grey wolves, coyotes and dholes evolved in Eurasia and colonized North America only relatively recently” (2).

Their findings have only left more questions to be asked. Who were the Dire Wolves’ ancestors? How did they first arrive in the Americas? While ultimately posing the question, how on the freezing-cold-Earth did they go extinct? 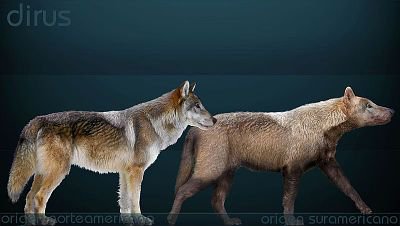 Before extracting ancient prehistoric mitochondrial DNA was possible, scientists based their Dire Wolf appearance predictions on the modern Gray Wolf. Working solely on the detectable morphology from fossil remains, scientists surmised that Dire Wolves must have greatly resembled the Gray Wolf in coat type, eye color, ear set, and pigmentation. Now that DNA evidence has begun to reveal that Dire Wolves may have arrived in the Americas well before the Gray Wolf and separately evolved on this continent without admixture of any genetic Gray Wolf material, scientists have proposed that the Dire Wolf may have looked more closely in outward appearance to the only living large canine to have evolved in the Americas, the Maned Wolf. Thus, two coat color theories have evolved from the two diverse ways of analyzing extinct, prehistoric animals. Did the Dire Wolf's coat look more like the Gray Wolf or did the Dire Wolf look more like the Maned Wolf? Perhaps we shall never know. The Dire Wolf Project aims to create a variety of wild coat types to reflect both evolutionary theories.