For 12,000 years dogs have enjoyed the position of man’s best friend. Through our close relationship with each other, it seems that dogs have evolved to reveal a new kind of intelligence. Scientists are just now finding that our loyal companions can perform tasks that not even chimps can do. Dogs can effectively read our emotions and have adapted to closely watch and interpret our movements and body language. According to recent scientific evidence, dogs have the equivalent abilities of understanding up to the level of a 2 year old child. Some dogs can learn as many as 1000 different words and even interpret those words from graphic representations.

However, in order to understand a dog’s ability to communicate with us, it is necessary to understand how a dog’s temperament varies depending on what service it was bred to perform. Some scientists believe that dogs were essential to our survival as a species. Until the beginning of the industrial revolution, dogs were bred to work together with us to find food and ward off enemies. Dogs helped us hunt, locate, and protect the things we needed. In return, they continued to thrive.

As a result of the many different abilities of our furry companions, dogs show different character traits based on a genetic inheritance. In fact, it has been shown that a dog’s temperament is 100% genetic. Although it can be shaped and molded through training and experience, in a stressful situation, a dog will always revert back to its genetically inherited temperament.

When discussing the finer points of dog temperament, an obvious difficulty arises. Although science has begun an initial interest in our close relationship with the dog, scientific evidence and information regarding dog temperament is limited, varied and often times contradictory. Many knowledgeable dog enthusiasts claim to have the answers to all temperament questions and opinions are thrown around without basis rooted in controlled experiments. This poses a difficult problem when needing to discuss this topic using consistent terminology and behavioral interpretations. Since this is the case, we must interpret dog temperament from what the Dire Wolf Project has been able to experience when breeding the American Alsatian over these last twenty four years.

The National American Alsatian Breeder’s Association has established its own temperament testing procedure performed on each puppy in each litter since the beginning of the project in 1988. Each breeder temperament tests puppies before they are shaped through their environment by experiences or training. We call the innocence of a young puppy the RAW dog™ and believe that pure temperament testing can only be done on dogs from birth to 12 weeks old.

After solid health, a unique large breed companion dog temperament (without working type behaviors) is the most important feature of this breed and has been the sole focus (apart from health) for the first twenty four years of the project. What we present below is an understanding of the RAW dog™ temperament as it has been shown to exist in the many dogs bred over these years. 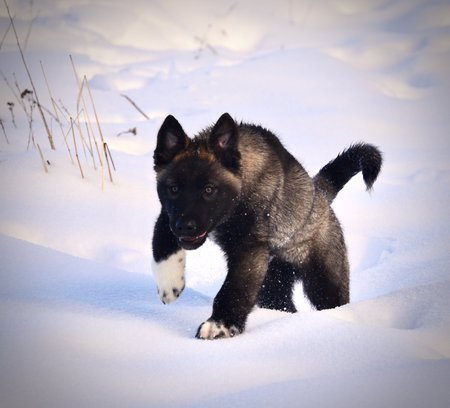 NOTE: On the scales below, the recessive traits are listed on the left and the dominant traits are listed on the right. We believe that each box represents a separately inherited temperament trait. However, due to the variance shown on each single phenotypic trait below, it is likely that each of the following are polygenic inherited traits and may very likely be manifested in the canine genome housed on more than one gene. Therefore, each of these traits is presented on a sliding scale. So, although a trait is dominant over another in the sense that in a heterozygous dog the dominant side of the scale carries both dominant and recessive traits, the dominant trait can be manifested in a degree of intensity. This may also mean that these phenotypic dominant traits may be incomplete, allowing the recessive traits of a heterozygous dog to show through in varying degrees. We present the following from what has been observed and recorded in standardized temperament testing environments on each dog bred throughout the lifetime of the Dire Wolf Project.

Highly submissive dogs are described as easily corrected and will drop down to the floor possibly releasing urine and/or rolling on its back. They bend to the will of another with ease. In contrast, fiercely dominant dogs are described as being strong-willed and assertive. They do not back down easily and maintain a level of assertiveness especially when confronted.

A friendly dog is outgoing and willing to meet and greet at any time. They can be seen wagging their tail and panting in seeming happiness to have another’s attention. An indifferent dog is uninterested in other people or dogs, but when approached will show a slight wag of tail or movement to be pet. Although uninterested, they are not afraid and will politely accept affection from others. In our experience, there are two types of aggression that are often used interchangeably; inherited and environmental. Dogs that inherit aggressive temperaments are completely uninterested in other people and dogs. An aggressive dog will first stare then raise its hackles if approached. If an approach continues it will bare its teeth and ultimately lunge forward in an effort to get another to back off. This type of aggression is not to be confused with nervousness, although they can co-exist.

A confident dog is one that does not react to sudden, unexpected events. It is self-assured in almost any situation. It will readily investigate people or situations that are unfamiliar. A nervous (shy) dog, on the other hand, does not want to investigate. It will turn or hide its eyes from the unfamiliar situation and can sulk, pout, or want to hide when scolded. Nervous dogs hold their tails low or between their legs and pull back their ears as they lower their head. They are cautious of new things and can be seen as shy of dogs, people or environments, each of which can be inherited separately. In severe cases, nervousness can manifest itself as aggression, fear-biting, urination and uncontrollable shaking. Most dogs have some level of nervousness.

Many people may tend to believe that a confident dog is the dominant trait and therefore nervous is inherited only if both parents hold the nervous trait, but it is our experience that a genetic nervousness is much more complicated than that. In our experience, genetically nervous dogs can produce relatively confident puppies. Furthermore, a genetically confident RAW dog™ is rare and most puppies need some level of socialization training in order to bring out more confidence. Because of these two occurrences in the dog, we believe nervous is the dominant trait.

Bonded dogs are those dogs that innately desire close territory as well as a desire to please and do what is asked by their owners. Some would replace the word bonded with loyal, although this trait is more than just loyalty, but also includes a genetic desire for a tight, close or familiar territory. Independent, in contrast, is a dog that has a very broad idea of territory such as a herd protection dog and a desire to do whatever is most beneficial to them at the moment. They do not mind being out of sight of their owners and can roam far and wide if allowed. They do not have a desire to please, but only tend to want to have their own way. When off leash, they are reluctant to return unless the reward is higher than their off leash interests.

Relaxed dogs spend the majority of the time sleeping and resting. They do not require much exercise. Hyperactive dogs are always on the move physically; digging, chewing, running, chasing, and exploring.

Dogs that are oblivious are unaware of their surroundings. They do not look around and take in the happenings in their environment very well. They are impulsive and can be seen as extremely goofy dogs. Some may bark constantly seemingly for no reason. Alert dogs, in contrast, are aware of all that surrounds them. They can be described as a dog that pays attention. They hear the slightest noise and see the slightest movement. Alert dogs make good watch dogs.

This category holds both play and prey as they are closely related to one another. A low drive dog does not initiate play on its own but has to be coaxed. It does not have a tendency to chase moving objects and playing fetch may seem uninteresting. The dominant trait of the high drive dog, on the other hand, chases moving objects readily. They pounce, grab, shake, and tug on toys. Fetch is a simple task that they perform with ease. They can stay focused on an object for an extended time and do not tire of play easily.

A hard dog can take a lot of pressure on the leash and a lot of force to its body without reacting. A dog of this type does not acknowledge soft touch and prefers to be handled with deep pressure and lots of manipulation such as lifting and rolling. Touch sensitive dogs do not need much pressure to react and respond to very light touch.

Dogs that possess a high pain threshold do not seem to feel much pain. This type of dog may not exhibit any outward signs that it is hurt or sick. When shots are given, this dog does not yelp out or show any discomfort. In contrast, a dog with a low pain threshold will yelp and cry easily when in pain. After the cause of the pain as stopped, a dog with a low threshold for pain may continue to exhibit behaviors of continued pain. This inherited temperament trait should not be confused with a hard dog. A hard dog, although oblivious to light touch and pressure can easily yelp and/or whine when in real pain.

When we have a clear and consistent vocabulary to discuss dog temperament as a starting reference, we can more easily describe the temperament of the dogs being bred under the Dire Wolf Project. As described in the Breeding Back article, the DireWolf Dogs, Int'l does not wish to recreate the wild Dire Wolf temperament, but a domesticated dog with the exact Dire Wolf bone and body structure as they are portrayed in skeletal remains. We must, then, establish a temperament in a large breed of dog that can live happily in our modern age. We, therefore, seek to establish the first companion dog temperament in a large breed of dog. We wish to eliminate all large breed working behaviors such as barking, digging, jumping, chewing, chasing, and pacing. This is being accomplished through selective breeding. 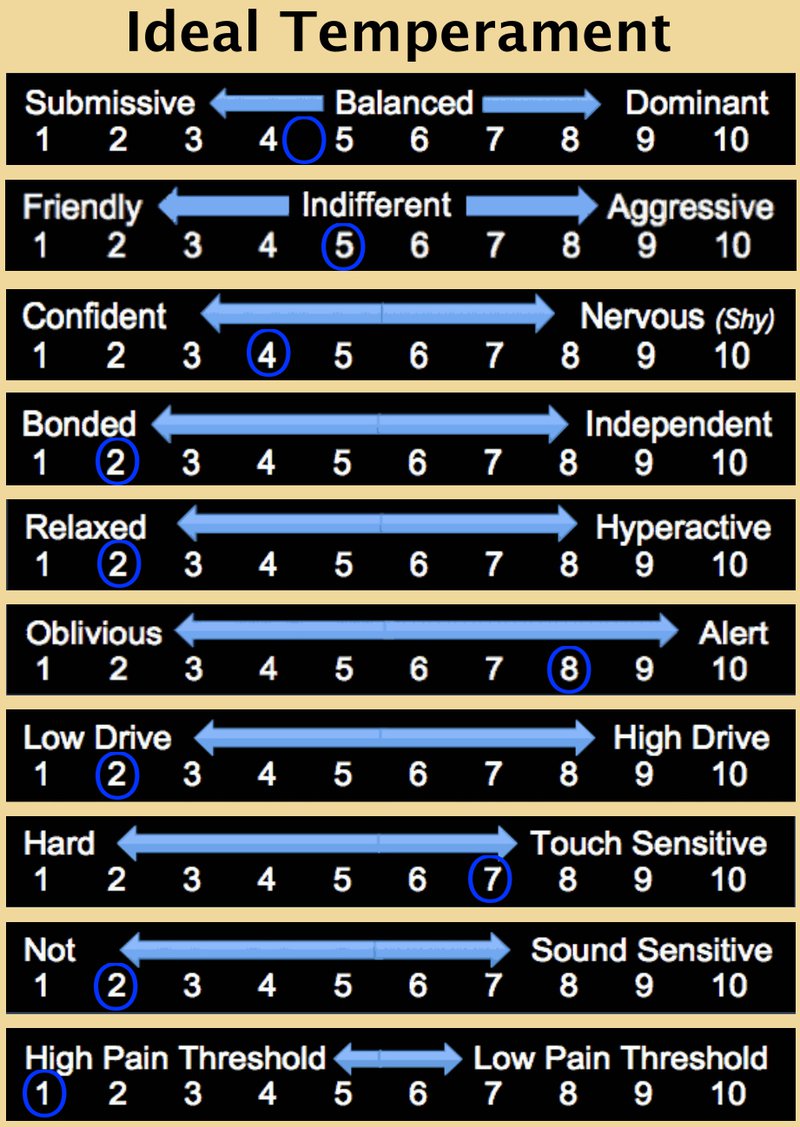 All truebred (F5 – F18) American Alsatians have a consistent temperament and each puppy born above the 5th generation possesses a very similar temperament to the above with a slight range in variation of one point on either side.

However, this breed remains under development and crossbreeding is a regular occurrence within the Dire Wolf Project. Because we believe in crossbreeding to keep our dogs healthy and eliminate inbreeding depression that can occur after years of breeding related dogs, our customers must be aware of how crossbreeding may effect the temperament of puppies in a particular litter. Though many 1st through 4th generation crossbred litters make great companion dogs, they do not necessarily fit the standards of the breed in either temperament or conformation until the 5th generation. Therefore, the temperaments in these crossbred litters will fluctuate much more broadly. Working slowly back and forth between inbreeding and crossbreeding is one of the ways we have produced the first strongbred dog.

Not purebred. Not crossbred. STRONGBRED!™

How To Interpret Your Dog's Body Language, Facial Expressions, and Vocalizations. Paws Across America. Retrieved: 2011-06-20.

Temperament and Personality in Dogs (Canis Familiaris): A review and evaluation of past research. Amanda C Jones and Samuel D. Gosling. The University of Texas at Austin. Retrieved: 2011-06-21.