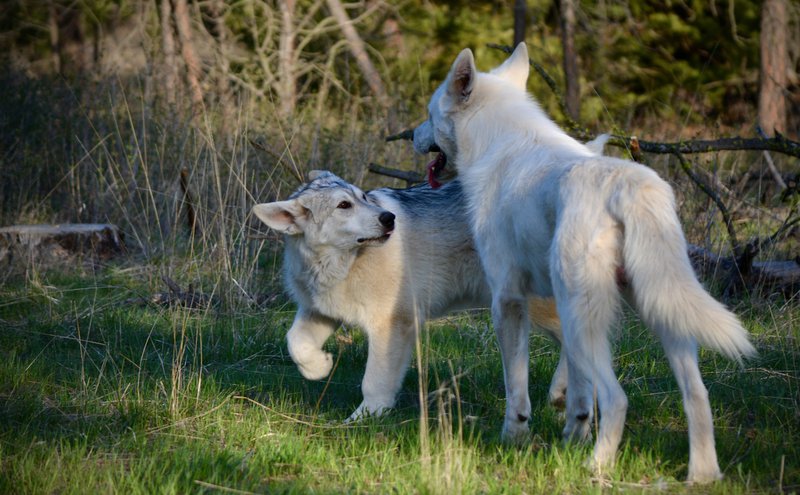 Essex and his father, Triton

The pack structure concept is hotly debated in our day and age. The idea that dogs rank themselves into social hierarchical structures has both well-established proponents and outspoken critics. In this article, we will peer in depth into the controversy in order to better understand our canine companions.

Unless you are brand-new to dog training, you have heard of the all-positive dog training method. It is the most prolific and outspoken dog training style of our time. It stands as, what advocates imagine is, a beacon of humane and ethical treatment of our beloved tail-wagging friends. Trainers in this category do not use any form of coercion, force, or positive punishment. All-positive trainers agree that dogs are willing participants if we would only give them a chance to make the choice.

Trainers in this category strongly disagree with pack structure and alpha dominance theory. They vehemently defend that the concept of 'pack theory,' as it is commonly understood by many today, is fundamentally flawed for the following reasons:

They contend that humans should be leaders and help guide their dogs to make the right choices, but they disagree that it is even possible for us to pretend that we are pack leaders. All-positive trainers make a clear distinction that humans are not dogs and therefore cannot be part of a dog pack.

Furthermore, all-positive trainers strongly advocate against traditional training methods arguing that humans should no longer treat dogs with violence like the captive wolves did to each other in those long ago studies. They further believe that if we want to be true leaders, we must lead non-violently without domination or intimidation, regardless of dog breed, drive or behavior issue.

Dogs are Not Wolves

This statement should be obvious. Dogs are not wolves. They have been domesticated. Of course, this is true. Dogs have been domesticated for thousands of years, just as many other domesticated animal species have. Their reproductive cycles and behaviors have been significantly altered over time. That is one of the reasons why the Dire Wolf Project refuses to "cheat" in dire wolf appearance by breeding in wolf or wolfdog content of any kind. We do not wish to go backward in time and lose the valuable domesticated dog traits that have been achieved.

As a result of the domestication process, dogs breed twice a year instead of once. They come into season sometime before their first birthday, usually 9-10 months of age in our breed. Domesticated dogs that become feral do not form family packs like wolves, but more like units of unrelated alliances. Furthermore, feral domesticated canines tend not to show the submissive behavior among unrelated groups that define wolf packs. This makes sense when one understands that domesticated dogs were bred on purpose to eliminate the innate fear and anxiety in favor of a more outgoing, approachable companion animal.

One of the first captive wolf studies was conducted by Robert Shenkel. He observed a pack of captive wolves in 1947 at the Zoological Institute of the University of Basel in Switzerland. Through his observations he concluded that dominant alpha wolf status was established through violent rivalries. When Erik Zimen worked with captive wolf packs in the 1960s and 1970s, the concept further solidified that wolves constantly bicker over rank, aggressively competing for the alpha role within randomly-placed, unfamiliar, newly-formed groups of unrelated wolves. Scientists observed a constant battle of whits from the wolves in this artificial environment.

However, as science became more capable of observing wolves in their natural wild environments, scientists found that wolves form related family packs, where the parents are the leaders, often called the alpha male and female bonded pair. Their offspring usually form subordinates within the group until they are old enough to go out on their own establishing new family units.

Today, many all-positive dog training advocates vehemently crucify those early scientists for unnaturally coming to conclusions that can no longer be supported by increased knowledge of real wolf structure within natural wolf pack formation. This is why they claim these studies' conclusions have been "debunked".

No matter what all-positive advocates claim, the following facts remain. When unfamiliar wolves are forced together in unnatural groupings, fierce aggressive acts ensue until an alpha is chosen and the others submit to the leader, accepting defeat. When wolves refuse to submit, fights to the death occur. When familial units naturally form in the wild, the wolf parents (alpha male and female) lead their puppies who willingly submit to the parents and any older siblings in a relationship established from birth. Whether forced acceptance or learned acceptance of the pack leader occurs, a leader is still established in both cases.

The Definition of a Pack

The truth is it doesn't matter what label you use: dominance theory, pack structure, social hierarchy, family structure, alpha role, social structure, etc.; dogs form units or alliances with one another in a pack (group, family, structure, unit, or whatever word you want to use for a bonded grouping of canines). There are leaders and subordinates within these groups. In the absence of a strong leader, some dogs have a tendency to more easily step into that role than others. Some trainers call this the more dominant dog. Others call it the top dog. Some call it the alpha. Still others choose to use a more friendly term and simply call it the new leader. Whatever one calls it, there is usually one individual who is willing to take charge while the others follow. This pack leader, the one who steps up to the plate to control the group, can be tyrannical, laissez-faire, authoritative, or diplomatic.

The pack subordinates also establish a hierarchy among themselves. Naturally, the more submissive individuals step back allowing the more dominant individuals to take the lead on many things within the established pack structure.

Therefore, a pack is a group of familiar individuals working together for the good of the entire group where one individual rises as the leader and the others agree to submit their will to the leader's authority.

The true dominance theory that many trainers believed before the 1970s and continues to be attributed to traditional dog trainers states that wolves constantly compete for alpha status whenever the opportunity arises.

Proponents of dominance theory will often state that dogs who behave in certain ways are acting dominant or trying to achieve dominance. A few examples where dogs are often labeled as dominant might help you understand:

The American Veterinary Society of Animal Behavior (AVSAB) defines dominance as "a relationship between individual animals that is established to determine who has priority access to multiple resources such as food, preferred resting spots, and mates." It is important to be aware that in order for a dominant/submissive relationship to occur, there must be one individual who consistently submits.

When someone steps up to the leadership role and another accepts that someone as the leader, a relationship is formed. The purpose of developing a relationship is to maintain order. In the wild, too much energy would be spent fighting over food, resting spots, and mates if a familiar relationship was not first established. Too much infighting would turn out poorly for each individual within the group because energy is a valuable commodity in the wild. Energy must be conserved for more important things such as searching for food, mating, and basic survival.

A predictable hierarchy helps the group structure run efficiently. An ordered group structure helps determine which individuals will get priority to resources, especially when limited. This leads to a reduction in conflicts that may lead to aggression. For example, the AVSAB describes how in a group of bulls, fights over mating are minimized because subordinate males avoid conflict and allow only the dominant bull to mate.

The Reality of Canine Pack Structure in Video

Click the link to see pack structure in action with a litter of Malinois puppies.

Establishing Pack Structure in Your Family

It is up to you to decide to step up and be the leader to show your puppy/dog how to live successfully in your family. This means you must establish structure in your puppy/dog's life. Show your puppy/dog what guidelines you have for them. Teach your puppy/dog specifically what you will and won't accept. Follow through with strength as a loving leader in a consistent manner and dogs will respect and follow you for life.

Structure the MOST Important Aspect of Dog Training
REFERENCES