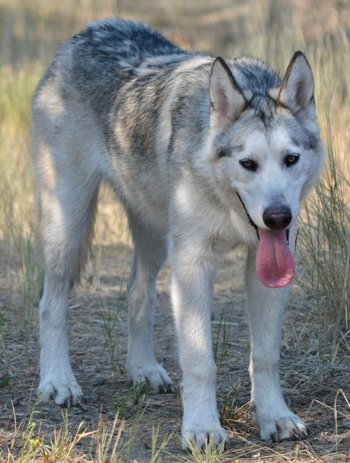 The American Alsatian Health Group is designed specifically for all of us to work together to help improve the lives of the precious furry friends we love. It is natural for most posts in this group to be sad and even mournful at times, especially when a few negative health issues are posted here all at one time. That is because we rarely hear from owners who have routinely positive vet visits. We oftentimes don't hear about the healthy dogs because they are healthy. So, that means that much of the posts in this group will be the ones we don't always want to hear, but must learn about for the overall health of the breed. If a post here can help someone else diagnose their dog before the worst happens, then we have accomplished one very important goal: to help our dogs live full and happy lives free from pain.

It is not normal for a dog breeder to accurately and honestly report each and every health issue that arises, let alone create a public group where owners are encouraged to share openly about their worrisome experiences with any health issues their dogs face. It is especially not the norm in the least for every dog breeder within an entire dog breed to inform owners and the public about the day to day health issues that might plague the dogs we love. In fact, it is extremely rare for dog breeders to openly discuss specific health issues in their dogs. If anything, he/she might give generalities such as, "I have seen hypothyroidism before in my dogs, but I don't breed dogs with that disease." However, actually stating which dogs from which parents, especially breeding dogs, at the exact time a diagnosis occurs is absolutely unique to American Alsatian breeders. It simply doesn't happen in the dog breeding world anywhere else that I know of.

There are at least two very important reasons for this. First and foremost, revealing each and every health issue in the breed in such a direct way has real monetary repercussions. In our case, people who have followed us for years have now decided that we have too many health issues in the breed and they cannot stand up for what we do anymore. When this happens, not only do we lose them from our groups, but oftentimes, they are still very active in other dog communities and feel a desire to share the experiences they have had with us in other communities. Since they have intimate knowledge of our dogs, they can easily share their stories with others and sway potential owners from any involvement with us.

The American Alsatian dog community is extremely active and responsive. We have quite a high percentage of owner engagement, which I cannot say is the case with other dog breeds. Most breed clubs are lucky if they get a small percentage of breeders to engage, let alone owners, too. Granted, we are a small community of breeders, but all American Alsatian dog breeders are required to be here and to participate as part of their certification process. Again, something else unheard of in any other dog breed.

Secondly, current owners can become concerned, even fearful, that their dog may come down with a health issue because of all of the negative news seen on the health page. When this happens, some owners may feel the need to panic. We, breeders, then receive desperate emails wondering if their dog will come down with one of the new diseases talked about in the health group.

It is our responsibility as breeders and keepers of the future of the American Alsatian dog breed and the Dire Wolf Project to be able to answer all of your health questions promptly and truthfully It is also our responsibility to be there for you should the worst case scenario occur and your dog does indeed acquire a serious health issue. We cannot prevent health issues from happening. Anyone who tries to tell you otherwise is lying or ill informed. No one can prevent all health issues from happening. Breeders can only work to eradicate them once they are known to exist in the breed.

That is another unique characteristic of American Alsatian dog breeders. We take responsibility for each and every dog we bring into this world. We never leave one of our own behind, no matter how much it hurts us, and that includes making the ultimate decision to put a dog down should its suffering require it. As American Alsatian dog breeders, we take an oath to take responsibility for each dog that is born under our care. It is our duty and a part of the animal breeding profession to make sure we breed the healthiest animals we can and take care of them throughout their lives should they ever be in need. This is why we are able to extend to each owner a lifetime health guarantee.

What would the world be like if every dog breeder did the same?

With that said, let's put the recent health information into perspective and see the big picture. We have actively been tracking the number of dogs born in our breed for as long as the breed has been in existence. Lois wrote down each and every dog born and sold, including owner's names, addresses, and phone numbers. She has binders full of them all. We know exactly how many dogs have been born into the breed throughout those years. Currently, the tally is 2280.

Back in the days before Internet really became our main means of communication, which surprisingly wasn't all that long ago, owners did not report back to Lois very often and we had much less involvement in the breed as we have now. But, Lois diligently wrote down all reported health issues that she received. These have been reflected in the current health database. One can easily see that we have much more owner response now regarding the health of their dogs than we ever did previously.

Along with that greatly improved owner response, I started breeding and over time I felt the need to specifically track puppies born in real time 7 years ago. Therefore, we have seven years of combined litters born each year, as I was now including dogs born from my kennels, as well. This was extremely beneficial because as owner involvement grew, so did the need for a more extensive health database.

One person told me on another dog group about a year back that it looks like we are increasing in canine health issues after all these years. No... we have much better owner reporting. We cannot say one way or the other whether our dogs have more health issues now than before owners became as involved.

That aside, having data from the last seven years allows us to know exactly what the most prominent health issue is in the breed at this very moment. Hypothyroidism is the number one issue by far plaguing our breed at this time.

(Consequently, I have heard other sources say, namely veterinarians, that hypothyroidism is on the rise in their work, too. But, let's simply take our breed for now, as we are most concerned with that in this group.)

Yes, we have gone from 2% last year to 2.8% this year. (97.2% not reported to have been affected.) This is an increased percentage. It is significant and we must sit up, take notice, and act. We will be working as a breed to eradicate hypothyroidism from the lines, but it will take time. We may see a spike in cases before we can see a reduction because breeding dogs isn't an instant gratification type of thing. We have to actually do the work of breeding for improved health in this area before we can hope for change.

As an example, Lois is working to eradicate any instances of kidney malformation in her lines right now, as you may recall. In order to do this, she must breed dogs without symptoms from the lines that saw the issue in order to determine, first off, if the condition was in any way genetic in nature or simply a result of external forces that were present during the pregnancy. Lois and Amey will specifically blood test the puppies from both the Sela and the Vespa litters to make sure their BUN and Creatinine levels are normal before leaving for their new homes.

And, just in case someone is thinking... if you would only wait to breed the dogs until they are 3 years old, then you wouldn't have this problem and no dogs would have hypothyroidism... you would be misinformed. Not breeding dogs with hypothyroidism isn't going to eliminate the disease from the lines. It will only prolong the issue in the breed because it would be the same thing as a young child hiding its eyes and believing no one could see him/her. Just because you don't breed it doesn't mean it won't turn up in the lines. We have to see it, record it, recognize it, find where it is, and the breed deliberately against it in order to eliminate it.

Not only that, if we waited to breed until the dogs were 3 years old simply for this one issue, we would need to keep WAY more dogs in kennel facilities for a much longer period to keep up with demand and progress toward our goals. Also, a dog that was bred at 3 years old could come up with hypothyroidism after 3 years old or have some other health issue arise at 5 or 6 years old. Our response would then still be the same as it is now. No longer breed that dog. Then, not breed offspring from that dog or wait to breed just that dog's offspring until after 3 years old to make sure we are no longer directly breeding a dog that will develop hypothyroidism.

Please... if you haven't done so already and you find yourself confused by this information or you feel angry at our methods of eradicating health issues from our lines... please... get the Dire Wolf Project book and read it! Then, you will understand the science behind what I have explained here.

You can find the Dire Wolf Project book on Amazon. Here is the link:
https://www.amazon.com/Dire-Wolf-Project.../dp/B07M6H8YM8