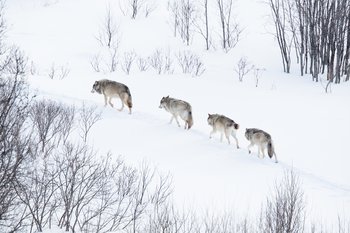 Wolves Walking in the Snow

“In all predators the prey drive follows an inevitable sequence: Search (orient, eye); Stalk; Chase; Bite (grab-bite, kill-bite); Dissect; Consume. In wolves, the prey drive is complete and balanced, as it utilizes the whole range from search to kill, ending in the consumption of the prey. In different breeds of dog certain steps of these five have been amplified or reduced by human-controlled selective breeding for various purposes. The ‘search’ aspect of the prey drive, for example, is most valuable in detection dogs such as bloodhounds and beagles. The ‘eye-stalk’ is a strong component of the behaviors used by herding dogs. The ‘chase’ is seen most clearly in racing dogs such as Greyhounds and Lurchers, while the ‘grab-bite’ and ‘kill-bite’ are valuable in the training of terriers. In many breeds of dog, prey drive is so strong that the chance to satisfy the drive is its own reward, and extrinsic reinforcers are not required to compel the dog to perform the behavior.” - Wikipedia (Prey Drive)

I found the above Wikipedia article on inherited instincts in dogs when researching instinctual human behavior for the DireWolf Guardians Philosophy of Dog Training book coming out soon from DireWolf Publishing. Human instincts are too controversial to make a consistent list of instincts in Homo sapiens. Researchers working to bridge the diversity gap identified one human instinct in common; people show fear of snakes and spiders. Infants as young as 3 months old show this fear. The fear of snakes and spiders developed as a way for humans to survive through the ages, so we developed a strong aversion to them that lingers in our genetic make-up.

There is widespread consensus among scientists that the species Canis is hard-wired for prey drive, or hunting instinct. That makes sense as dogs come from wolves that are built as superior predators. Dogs share five distinct aspects of prey drive that appear to be inherited separately: search, stalk, chase, bite, dissect, and consume. Dogs show varying degrees of these five pieces of the prey drive puzzle, correlating to the idea that each of these are inherited. Breeders can select for or against these traits when breeding. Sight-hounds exhibit a superior chase instinct that is combined with their body type to produce swift runners. Border Collies and their famous stare harken to an ability to tease out the stalking part of prey drive in dogs. The Malinois and other protection breeds have perfected the bite portion. Blood Hounds appear to have perfected the searching aspect of the hunt. If it is possible to breed for a certain aspect of the prey drive instinct in the canine, would it then stand to reason that it could also be possible to breed against a certain aspect of the hunting instinct?

Could a breeding program breed against these instinctive traits at one time, further pushing man’s best friend from its wild ancestral roots? The Dire Wolf Project aims to find out. We crossbreed to working dog breeds to become more genetically diverse as well as to add certain health, temperament, and/or appearance traits that are lacking in the breed and needed in order to move closer to our ultimate goals. We go to work to breed against the working dog traits that make up the instincts found in the canine species. What do you think? Can we accomplish it? Have you ever known a dog of any breed to be void of all prey drive instincts? What are your thoughts on if it would be beneficial for a dog to lose most of its prey drive instincts? Let us know what you think in the comments below.