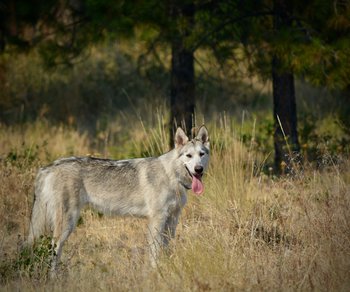 I sat back in my chair and adjusted the computer on my lap as I wrote down the description of the puppies that had arrived that day. As with every litter, I weighed, measured, and performed the first temperament test on each puppy. Only this time, there were so few puppies that the time it took to do all of this was so short that I almost felt I had missed something.

This was Darla's third litter for us here at DireWolf Dogs of Vallecito, LLC and we had hoped for a much larger litter to fill the need from families waiting patiently for their turn in line. But, it was not to be. The Masked Heroes litter was one of the smallest litters to arrive at the Dire Wolf Project to date; one female and two males.

But something was out of place. These puppies did not have the features that I meticulously calculated from a match between Stanley and Darla. Instead, I saw two gold wolf sable puppies and a light silver female with a white face. These color combinations did not compute with my plans.

As with all litters, I swabbed each newborn puppy's cheeks and placed the wet vile into the small container to ship off to Embark Veterinary for DNA analysis. Then, the long wait for results kept me wondering as the puppies grew week after week, not anything like I had predicted.

When the notice finally arrived through text that the DNA results were now available, my heart fluttered as my hands flew over the phone's interface to open up my account and peer at the information my mind had been anticipating.

After checking on the health, which was clear, as suspected, I came to the section describing the haplotypes (large strings of DNA inherited intact from the parents that can be traced back through the parent's lineage). To my surprise, the results showed a completely different haplotype than I had suspected. These puppies were not fathered by Stanley, after all!

As my mind raced back in time to when Darla was first in heat, I remembered that I had wanted Darla to breed with Tudor, but when I placed them together I did not see any activity or interest from the young stud. Believing him to be too immature to breed, I switched him with one of our proven studs, Stanley, to not miss the chance to have a litter from such a wonderful mother. Stanley was immediately interested; a stark contrast to Tudor's desires, and so I had no reason to believe Stanley would not have been the father of the resulting litter.

Sometimes life can surprise us! 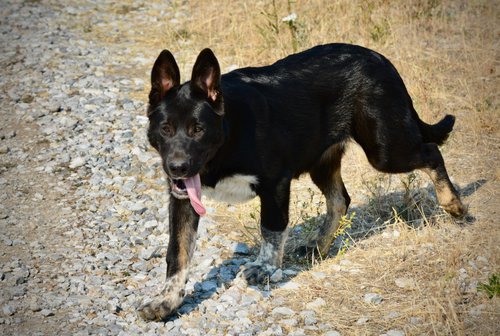 I had been away on a two week long puppy delivery trip when I received an excited call from my husband, Jay. Razar was in heat and bred with Kodiak.

Wait! What? My mind reeled to process this new information.

Razar wasn't supposed to come into heat for another month! When Jay repeated that Kodiak has tied with Razar my heart skipped a beat! This was not supposed to happen. Razar was never meant to breed with Kodiak. Instead, I had wanted to breed her with Essex patiently waiting in the pen next door.

How did Jay miss that Razar had come into heat? I wanted to scream, but I knew it would do no good. The die had already been cast.

I hung up the phone a little discouraged by this setback, but decided to review my notes regarding a match between these two lovers. I would definitely require a female out of Razar in order to maintain the genetic diversity that would be lost otherwise.

To my great surprise, a match between Kodiak and Razar would produce 5th generation puppies! Whoa! I hadn't seen that before when I was planning the next steps for our breeding program. What a find!

Two months later, the puppies from Kodiak and Razar arrived, healthy and good-tempered. They were beautiful large puppies with wonderful dispositions, perfect specimens to move the breed forward. The only problem was that four out of five of the females from this litter inherited the tan points color pattern. The odds of that happening are like placing four different colored marbles in a bag and randomly choosing the red marble four times out of five.

It turns out the one female with the wolf sable coat did not have the calm temperament of the others, so we had to choose one of the tan pointed females. Two stood out to us: Meriwether Lewis (pictured) and Stagecoach Mary. 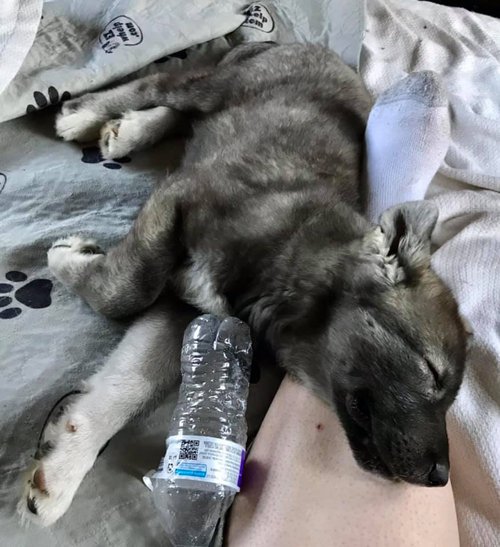 From the very beginning, my plan was to breed Stanley with Darla. For her first three litters, it simply never worked out. Darla did not seem to want to have anything to do with Stanley, even though his handsome debonaire features swooned all of the other girls on our property. But, I thought I would try him with Darla one last time. We usually do not breed females more than four times, so I knew this was going to be my last try with Stanley and Darla.

This time, though, Darla was much more receptive to Stanley's advances and they successfully bred one time. I was happy with that and so I figured that another two months would not be too long of a wait for this highly anticipated litter.

When the time came for Darla to give birth, she surprised us all by only having one puppy!

Having a singleton puppy is very rare in dog breeding, especially in our breed, so I had to do a bunch of research to learn how to take care of an only puppy's needs.

As it turns out, Black Dragon was a dream puppy and so attentive and considerate. He is being trained as a PTSD service dog with mobility tasking embedded in his training. The most amazing aspect about Black Dragon, though, is not his wonderful temperament, which is incredible in its own right. However, it simply blows my mind that he is a black wolf sable male with yellow eyes. We have increased the odds of this happening by placing the parents together that would produce this great combination of traits, but the fact that Black Dragon has EVERYTHING we wanted from this match and it all came together in THE one puppy that was born from a match that I had been trying to achieve for the last two years blows me away.

As with all of life, sometimes things don't go as we plan, but if we wait with patience and stay on the way we know is the right one, we just might be surprised at the great unforeseen events that come our way. We simply have to be open enough to recognize them when they occur.

As mama always says, "Life is like a box of chocolates. You never know what you're gonna to get."

Because there are many aspects of dog breeding that are beyond our control, we must remember that we, humans, do not always have the power to make our meticulous plans occur exactly as we project them. We should plan well and with much attention to detail, but once we do so, we must stand back and accept any events that occur that could not have been prevented.

Every breeder is fallible. All breeders make mistakes. It is how we choose to move forward from the setbacks that makes us great dog breeders over time.